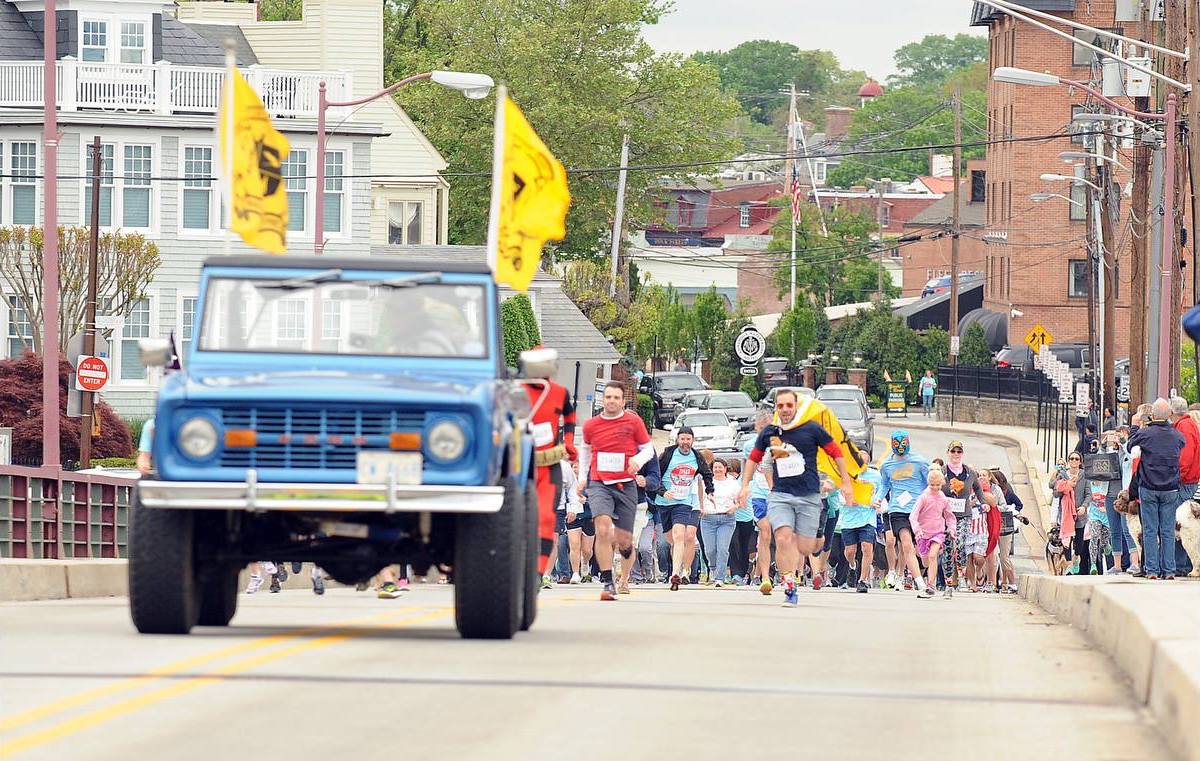 The Bridge Run is May 7.
Starting at the Crack O' Noon!

Cost is $30 which includes an event shirt.
Registration opens at 9:45a and closes 11:45a.
Pre-Registration is closed so we can count shirts and get organized. See you tomorrow morning!

Described as "the least challenging athletic event ever conceived" by Runner's World magazine, the .05k extreme sports event is a grueling test of mental and physical toughness. Some competitors have taken as long as five minutes to complete the course that begins on the Annapolis side of the Spa Creek Bridge. 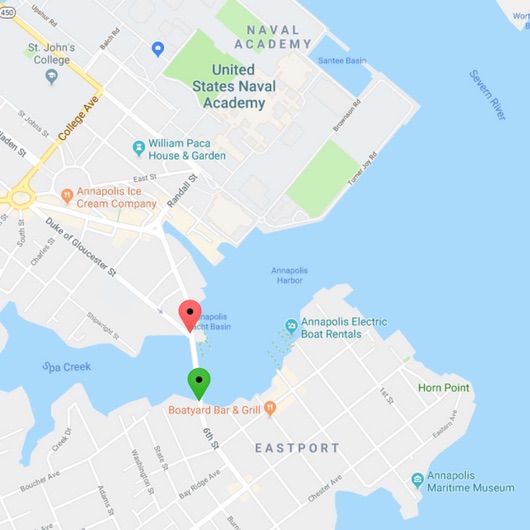 The Wild Rumpus: A Bridge Run Primer to Race Day 2019

It needn't have been this way. But when the overlords of Annapolis rendered the Eastport Bridge useless in 1998, the good people of Eastport were in a quandary (similar to a peninsula). So as all good schoolchildren know from their lessons in Eastport history and civics, that was the occasion for the cannon shot heard 'round the upper reaches of Spa Creek. Revolution was at hand. Once relations between the two forces had been restored and Eastport commerce saved, the newly formed Maritime Republic of Eastport created an extreme test of athletic competition to celebrate the peace. What happened next is the stuff of legend: THE race was born.

With much help from MRE surveyors and geographers not to mention a subset of the U.S. Olympic Committee, a race course was established. Beginning at the westernmost edge of the approach to the bridge (at what is called the Annapolis Yacht Club), the field of entrants run (or lope, or stroll) completely across the span and to the finish at the easternmost edge. The distance of 0.05 kilometers (more about that in a moment) at first seems less than challenging. Au contraire, mon frere. With but a single hydration station, one's strength ebbs. Furthermore, when wind resistance and the incline are factored in, not to mention the ominous grid pattern on the bridge (as well as its height), some prospective competitors have been known to blanche and subtly make their way to the rear of the signup line, hopeful that all slots will be taken before their turn comes. (You will know them by their outfits, likely adorned with symbols and lettering associated with places on the Annapolis City shore, such as the Naval Academy.)

The question is often asked: Why does the run always go from Annapolis? To anyone who has spent time in the two communities, the answer is obvious: We always run to the light, away from where the wild things are. Once they've seen Eastport, few runners return. (Except for MRE Revolutionary Father and former Annapolis Mayor Josh Cohen, whom the MRE has been accused of nurturing as their Manchurian Candidate. But that's a story for another day.)

As is their custom, the Maritime Republic of Eastport will be donating the proceeds to a worthwhile cause. This year, the funds will be given to "Haley's Helping Hands of Maryland, Inc." Founded by Haley Havard, a Key School student, Helping Hands gathers and distributes gently used clothing, shoes, and sports equipment to those in need, whether homeless, living in a shelter, or living on their own but in need of support.

This, the 2018 iteration of The Bridge Run takes place on Saturday, May 12. Registration begins at 10:30 am in the Long & Foster Realty parking lot just on the Eastport Side. Registration fee: $20, for which each entrant will receive a distinctive, Jim Toomey (of "Sherman's Lagoon" fame) designed tee shirt. The race itself begins at the crack o' noon. It concludes about 35 seconds later. Awards in the form of unique statues (inspired by Cindy Fletcher Holden) will be presented to finishers in random categories. This race, sometimes called "the world's easiest," is a qualifying event for the next MRE Olympiad.

Now, as to the length of our marathon race. It has been alleged that our claim of it being 0.05 Ks long isn't quite right. That reflects a classic misunderstanding of the term "K." One should not assume that it stands for the term "kilometer." Were that it was thus. (Actually, "km" would then be its proper abbreviation.) It was our MRE elders who established the race's name that way, probably intending to get around to fine-tuning the nomenclature some day. Now, after two decades of successfully staging this world famous test of endurance (truth be known, our history is somewhat muddled), we're stuck with it. But please note that race critics not only consider the length of the physical "Eastport" bridge span in their earnest if misguided estimations, but also factor in the additional .025 km — the distance from the end of the bridge to the Boatyard Bar and Grill, our tee-shirt sponsor and the official post-race recovery point of the MRE.

How did this come to be? you may wonder. In laying out the celebrated course across the Eastport bridge, our team of race stewards and surveyors (a select group of golden Labrador retrievers under the direction of a prominent local musician whose band plies its trade under a name associated with bivalves) came up with an optimal performance distance of about 164 feet, the same distance some truth-in-media observers say it to be. It's coincidental that this measurement in U.S. Customary Units is but a tenth of half the standard "kilometer" according to the European concept of standard measure, expressed in "metrics" under the International System of Units, a system we in the Maritime Republic of Eastport largely ignore. Furthermore, let it be known that the precise beginning and end points of the race course are not fixed. Rather, they "float" from one year to the next, depending upon where the committee "marks" them to be. Therefore, one year the start might be close to the Annapolis Yacht Club at the westernmost end of the bridge; the next year the race might terminate near Bud's Eastport Shell station at the eastern end. (Or at some other points between the two, maybe where our Labrador retriever surveyors discover a bit of discarded food.)

We also employ what might be termed a "running" start as a complement to the "running" finish. Winning times are adjusted according to where the two points might be and the judges' understanding of both. (They may not always be in agreement, in which case we rely on global positioning and monitor it from above, in the official MRE Air Farce blimp, when it's available.)

In conclusion, we of the Maritime Republic of Eastport are proud as punch to proclaim that our 0.05 K Bridge Run to be on the square and consistent with the exacting standards established by the likes of, say, the New England Patriots.

Sign up to receive updates and hear all about the great community events the Maritime Republic of Eastport is concocting!

Download the Where In Annapolis Mobile App to participate and get live updates during the event! 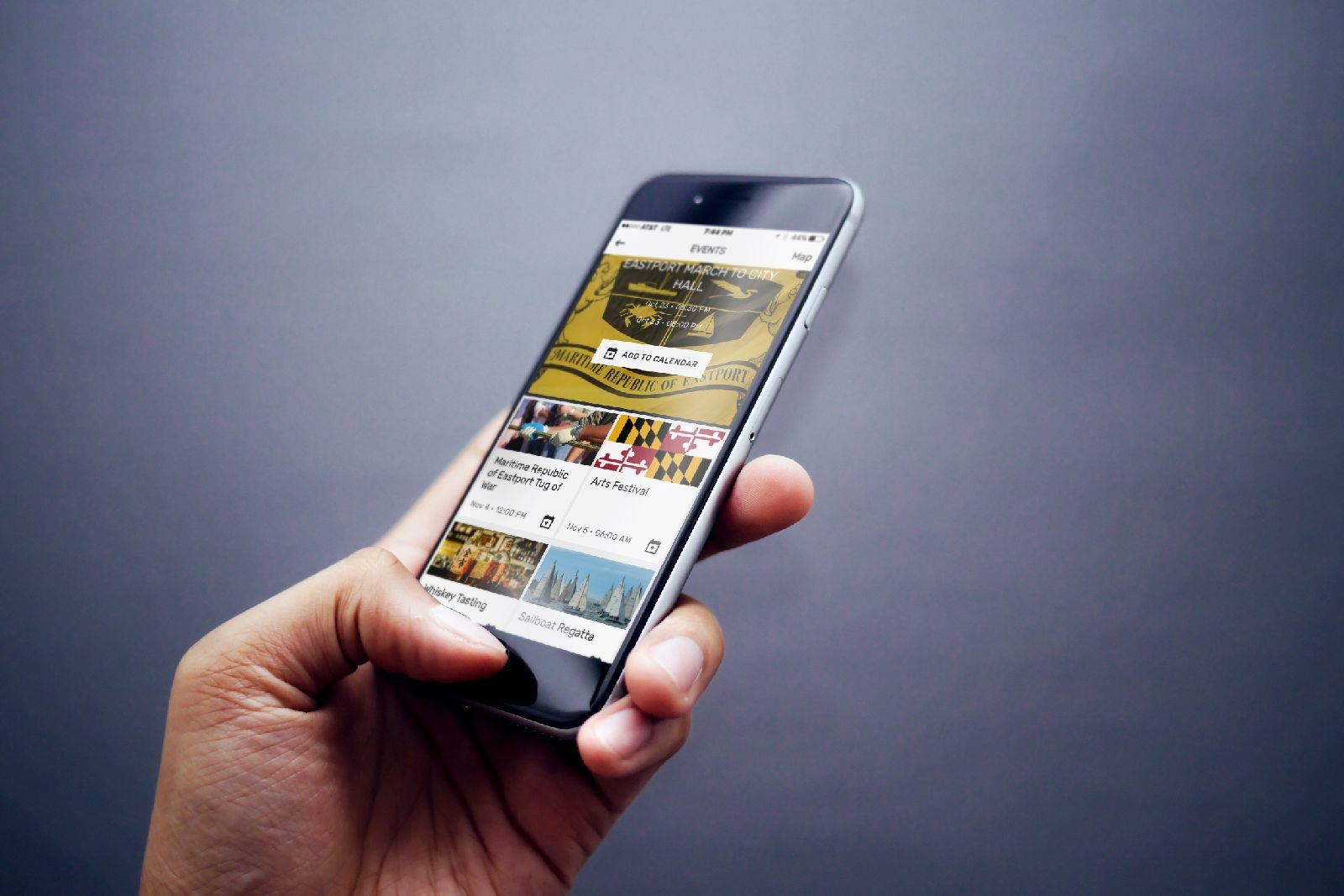